The winner of the Shining Knight Award for 2015 was Humphrey Bolton. The strength of character of this boy deserves recognition and in addition to that he has done a great deal to raise awareness of the cruel and damaging practice of puppy farming. He has also raised the profile of the Breed and the BMDCV. 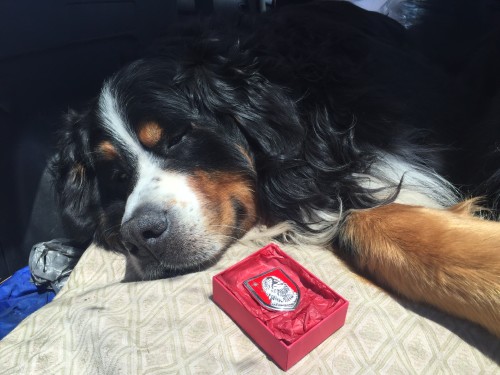 When Humphrey was rescued by the BMDCV from a puppy farm on 16 October 2013 he was a broken and terrified dog. The psychological damage to Humphrey was severe. He was too frightened to move and had to be pushed and lifted out of the car. As soon as his feet were on the ground he ran to the nearest fence and cowered against it. He stayed there all night, despite the rain and every time he was approached he would cower back, drop his head and turn away. The prognosis wasn’t great. One vet suggested he should be put down. Other people thought there was hope. Amazingly, for a dog who had clearly been abused and neglected, Humphrey never showed any signs of aggression.

His new Mum began to post news of Humphrey’s progress on her Facebook page and was overwhelmed at the level of interest her posts garnered. So she created a community Facebook page (click here to go there)  where people could follow Humphrey’s progress. Pictures really do say a thousand words and so she also uploaded videos of Humphrey to YouTube.

Slowly, with what often felt like one step forward and to steps back, Humphrey began to emerge from behind the protective barriers he had built. The day he actually took food from his Mum’s hand was definitely cause for celebration.

One of the demons that Humphrey found hardest to overcome was the terror that a lead and collar produced. As soon as he caught sight of a lead he would cower and urinate in fear. His Mum and Dad began to take him on play dates to the houses of friends with Berners and large backyards, securely fenced so that once inside Humphrey could roam free. Of course, he had to have a lead on to get to and from the car on these occasions. For months he could not seem to beat this particular fear. Every time he spotted the lead he would cower and pee. Then he had a breakthrough. He seemed to realise that the lead no longer meant something bad, it meant something good. With this realisation he went from strength to strength and a year after his rescue he had recovered enough to go on his first BMDCV walk.

Thousands of people from all around the world have followed Humphrey’s journey, with views at times exceeding 12000 hits, and through it they have been made aware of the abominable nature of puppy farming. His story was filmed by Yappy Hour TV and has been shown repeatedly on Channel 31 and Foxtel. On seeing his story, Victoria Stilwell – a UK TV Celebrity dog trainer – has featured Humphrey in her tweets and on her Facebook page. His story was also picked up by a small Western Australian primary school who were doing a project on puppy factories. Humphrey’s Mum sent the class photos, letters and videos documenting Humphrey’s progress and the children have adopted him as their own. Humphrey has attended meet and greet sessions with community organisations such as the Girl Guides and the Rotary Club to bring attention to the vile practice of puppy factories and raise awareness of dog rescue groups.

By having the strength of character to overcome the demons of his past, Humphrey continues to raise awareness of the cruelty of puppy farms. His very appearance (his awkward gait and his instinctive flinching for example) is enough to draw attention, especially in contrast to his adopted sister who has the typical smooth Berner gait and confident air about her. When watching him it is clear that he has had a difficult past. And so people enquire as to cause of the differences between him and his sister. And word spreads. For this reason, Humphrey is a Shining Knight. 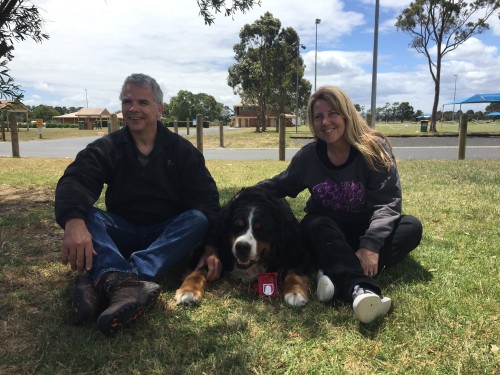 Humphrey with his proud Mum and Dad, Dave and Tracey

A late postscript: Humphrey has just been filmed for the channel 10 program Bondi Vet.